Arriving at our apartment in Rome we were reunited with our mothers Julie (Karen) and Lynette (Reubs) nearly ten months after leaving New Zealand.  We were very excited to see them (and we think they were excited too, despite being pretty fatigued after nearly 40 hours of travel!)  Lynette had never been to Europe, and Julie hadn’t spent much time in this part of Europe. Our plan had us spending time in Italy and Switzerland, with Lynette leaving us a week before Julie so that she could see friends in Dubai and get back to work.  Some people might think we were crazy for travelling with our mothers in law, but we were determined to give it a shot!

On our first night we went for a little walk and found a local pizzeria…as well as feasting on fudge from New Zealand and a home made Christmas cake (Reuben’s one dearest wish from home!) Our mums had worried if they would get it through customs…they were yet to learn of how relaxed other countries are about food products compared to NZ!

Our first full day in Rome dawned bright and sunny, in a stunning defiance of “typical winter weather” that continued throughout our time with the Mums. It’s hard to describe the feeling of awe that came from stepping out of the metro station and seeing the Colosseum rising in front of us.

What we hadn’t anticipated however was the massive queue in front of us – however after an hour and a half we made it in to look around. (Lesson learned – always book ahead if possible!) 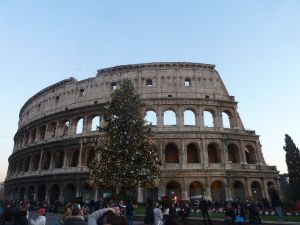 Still had the Christmas tree up!

The Colosseum was beautiful but left us hungry, so after a quick lunch of an unappealing sandwich (lesson learned – make our own lunches!) we headed over to explore the beautiful Roman forum and Palatine hill.  We had lots of fun exploring these ruins in the middle of the modern city!

New Year’s Day is a big celebration in Italy, so we had been forewarned that most things wouldn’t be open.  We therefore planned a walking day, starting at the Spanish steps. These steps happened to be hosting a concert that we caught the end of before seeing the church at the top of the steps.  We also managed to dodge the annoying flower sellers. Now, I don’t mind people trying to make a living but these guys went way too far – pushing flowers into people’s hands and refusing to take them back, telling them that they were free then demanding money and getting into people’s faces so that they lost their balance and fell trying to get away from them (okay, that last one might just have been me!)

We grabbed a coffee at a local coffee bar and learned three important things – coffee in Italy is mostly drunken standing up in the shop, coffee with milk in it after morning time is really only for tourists and children, and tea drinkers are punished by paying more for a tea bag and hot water than for any kind of coffee! (Only Reubs really got it right with a short, sharp espresso).

Our next stop was the famous Trevi fountain. Legend has it that if you throw a coin in here, you will return to Rome. Needless to say, we were all keen for that!

We finished our walk by Capitoline Hill and saw Trajan’s column. This was especially interesting for Reubs and I as we had seen the plaster casts of this at the Victoria and Albert museum. We love being able to make connections between what we see!

Stay tuned for the next instalment of “The Adventures of the Mums in Europe!”